It all began in 1964, When Lenore Feibel and Dorothy Forbes moved to Vero Beach, missed their former AAUW chapters and became INVOLVED. They organized a tea, which 65 women attended. At the first meeting, held at the Women’s Club, 54 charter members joined the new branch. Now the third largest of 42 state branches, the Vero Beach group promotes a love for learning and is dedicated to the empowerment of women and girls.

For going on six decades, local members of the AAUW have supported educational and philanthropic activity. In past years, the branch involved children in theater and the arts, created holiday parties for clients of the Sheltered Workshops for the handicapped, held GED graduations at the Indian River Correctional Facility and Vero Beach High School and supported the Safe Space Shelter.

Here are some of the current, ongoing branch outreach and cooperative activities:

AAUW Vero Beach Branch proudly stands on the shoulders of strong women who came before us. Please get INVOLVED by joining our ongoing efforts to help women and girls! 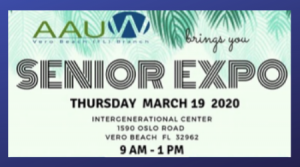